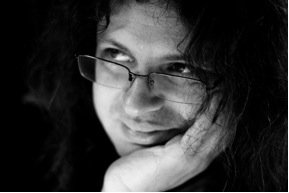 New York’s Russian Bookstore #21, located on the second floor of an unassuming office building, at the end of a flight of drab stairs, was the venue for a Russian-language reading and talk by poet, editor, critic, and translator Dmitry Kuzmin on April 18.

The store is oddly named considering it’s the only Russian-language bookstore in Manhattan (though there are a few in Brooklyn’s Brighton Beach). It reminds me of every library in every Russian home (or formerly communal apartment, rather) I’ve ever visited: dark brown bookshelves covering all walls from floor to ceiling, stacked with aging books, some piled on top of one another to make space. Russian Bookstore #21 is filled with the classics, volume after volume of full collections by Chekhov and Tolstoy, sprinkled with contemporary works and works in translation. The design of Russian books is mostly tacky, and the paper stock of older books published in the Soviet Union yellows and flakes rather quickly. The wall décor in the store complements the merchandise: kitschy fading art posters and a black and white enlarged photo of several men, including Vladimir Lenin.

The patrons as far as I could tell are the aging in Diaspora, Russian-speaking men and women in their fifties and older who come to refresh their home libraries with the kinds of books they would have had back home.

Dmitry Kuzmin was somewhat out of place in this setting. He wore jeans tie-dyed red, pink, and black, a clashing long-sleeve button down shirt with polka dots and splotches of blue, and black leather calf-length boots with a series of metal spikes connected by chains at the ankles. His long wiry graying hair grew past his shoulders.

Kuzmin is 43, still lives in Russia, is openly gay, sprinkles American colloquialisms and pop culture references into his work, and writes primarily in free verse. Free verse is so maligned in mainstream Russian poetic culture that he had to make an explanatory caveat: just because he writes in free verse doesn’t mean he can’t also write rhymes. To assuage the audience at #21, he read some rhyming poems (one in particular addressed Moscow Mayor Sergei Sobianin, who in 2011 notoriously pledged to replace all the city’s asphalt sidewalks with brick). Kuzmin then switched back to what he referred to as his “normal” poetry.

Kuzmin read from his collection Khorosho Buit Zhivuim, or “It’s Good To Be Alive,” published by New Literary Observer in 2008, his first solo collection released when he was almost 40. He also read newer poems from the screen of a tiny laptop perched on a pile of books on a wobbling shelf that the bookstore staff dragged to the front of the room to serve as his makeshift podium. (He announced the reading of this set of poems by saying v etom meste nachinaetsa bonus trak, meaning “the bonus track starts here.”) As he read, Kuzmin constantly smiled, seeming pleased with his own bilingual and pun-filled poems. When read out loud, his poems sounded choppy, with short lines and harsh stops accentuated by the pop of enunciated consonants at the ends of lines.

There was silence in between each poem. After a while, one audience member reassured Kuzmin: ne khlopaem iz vozkheshenie, “we’re not clapping because we’re so delighted.”

Kuzmin is finally getting recognition as a poet after being known mostly as an editor, a collector of things, someone who published anthologies and created websites to showcase young post-Soviet writers. He came up in the literary scene two decades ago as a member of the younger generation rebelling against the canon.

Kuzmin has now been invited to the U.S. to share his own poetry, and he seems quite happy with his newfound (albeit small scale) fame. Maybe this is why I was slightly turned off, rubbed the wrong way by what I read as cockiness. I tuned out during the reading and only let phrases and lines seep in. Some stuck out, often the ones that were a mix of Russian and English (translations are my own):

The literary culture on display that night was one of contradictions: of the old world celebrating a figure of the new culture, and of that figure inherently rejecting old forms. Kuzmin further complicated things with some words of wisdom at the end of his talk: “Culture develops when the young recognize (or re-recognize) and cite the old, not vice versa.” Was the implication that his own work doesn’t push things forward since it is built on a rejection of past poetic styles? Or that the praise of the elders in the audience would not have any bearing on the progress of literary culture?

Kuzmin referred to otkaz ot hierarchia, a rejection of hierarchy, as the predominant  literary trend in contemporary Russia. At the collapse of the Soviet Union, explained Kuzmin, the model of having ten main celebrated poets at any given time also collapsed. Kuzmin lives under a more polycentric model, as he calls it, where instead of the most famous poet filling a soccer stadium, there are more poets out there, most of whom will never reach that level of recognition. Now young writers increasingly make their works available online, eschewing traditional distribution modes.

If this is the case, will the young recognize a debt to the old in the case of Russian Bookstore #21? I wonder if the store will find patrons among the newer immigrants or second generation. It seems unlikely. But it is exactly for this reason that I am so happy the place exists, because it’s like a little time machine, a little time-and-place machine, in fact.

As the reading came to an end, I wondered what would happen to the Russian-language literary culture of New York City when this generation dies off.

Tanya Paperny is the managing editor of Circumference and a freelance writer, editor, and translator (among other things). Her essays and translations have appeared or are forthcoming in The Literary Review, The Massachusetts Review, Bitch, The Prose-Poem Project, and LitDrift. She teaches writing at Columbia University and The College of New Rochelle. For more information, visit her blog.