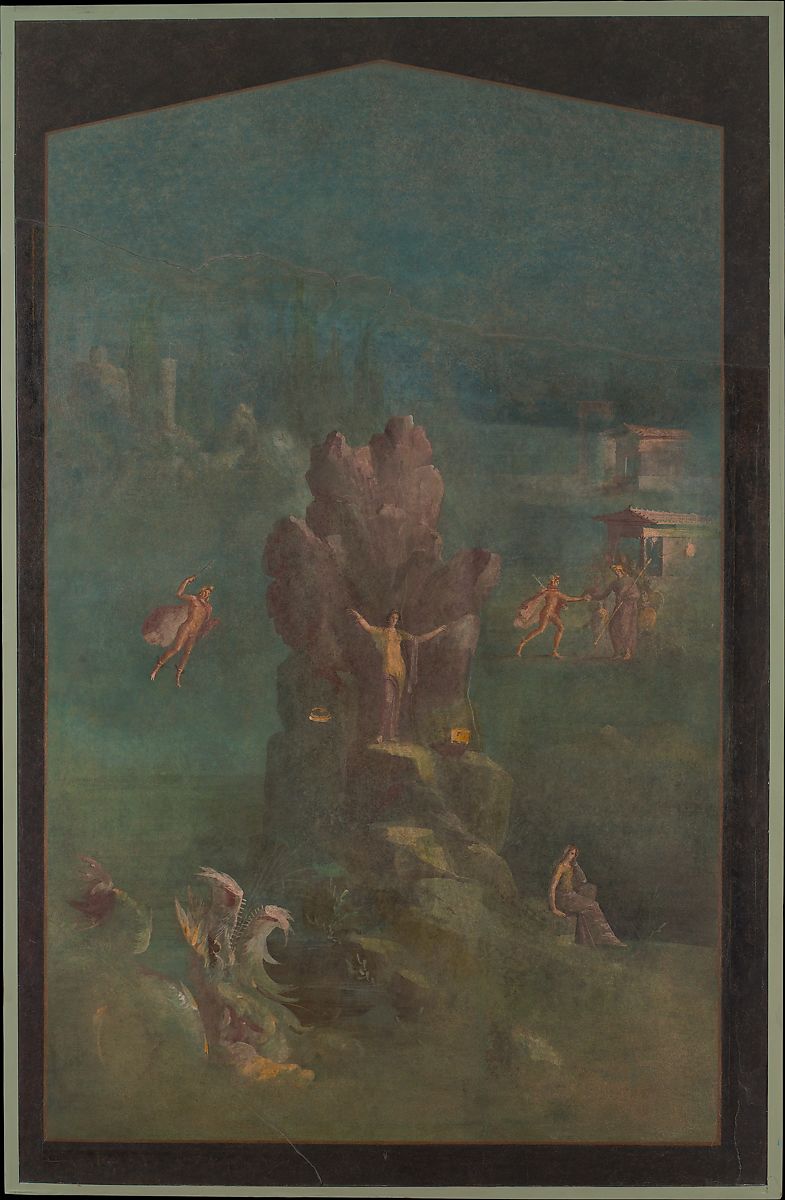 Wall painting: ‘Perseus and Andromeda in landscape, from the imperial villa at Boscotrecase,’ last decade of the 1st century B.C., public domain

the sacrificial knife in a woman’s hand

Liana Sakelliou has published eighteen books of poetry and criticism, as well as translations of Ralph Waldo Emerson, Sylvia Plath, Emily Dickinson, H. D., Denise Levertov and Gary Snyder. Her own poems have been translated into eight European languages—including, most recently, a volume of selected poems in Rumanian—and have been published in a number of anthologies and international journals. She teaches American literature and creative writing in the Department of English Language and Literature of the University of Athens. The recipient of grants from, among others, the Fulbright Foundation and the Department of Hellenic Studies of Princeton University, Ms. Sakelliou is a member of the Coordinating Committee of the Greek Writers’ Association, as well as a short story judge for the European Union Prize for Literature. Ὅπου φυσᾶ γλυκὰ ἡ αὔρα (The Greek original of Wherever the Sweet Wind Blows) was a finalist for the Greek National Poetry Award.

Don Schofield was born in Nevada and raised in California, and has been living in Greece since 1980. Fluent in Greek, a citizen of both his homeland and his adopted country, he has published several poetry collections, the most recent of which are The Flow of Wonder (Kelsay Books, 2018) and In Lands Imagination Favors (Dos Madres Press, 2014), as well as an anthology of American poets in Greece (Kindled Terraces, Truman State University Press, 2004), and translations of several contemporary Greek poets. He is a recipient of the 2005 Allen Ginsberg Award (US), the 2010 John D. Criticos Prize (UK) and a Stanley J. Seeger Writer-in-Residence fellowship at Princeton University. His first book, Approximately Paradise (University Press of Florida, 2002) was a finalist for the Walt Whitman Award, and his translations have been nominated for a Pushcart Prize and the Greek National Translation Award. Currently he lives in both Athens and Thessaloniki.

Menses and the Sea

I can still see you: an echo

as the sea fathomed you out

Pretending to agree with people