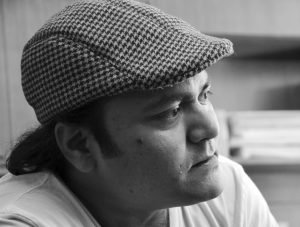 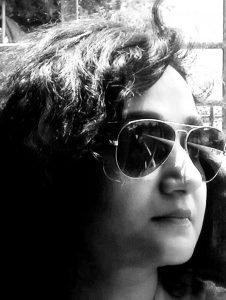 Geet Chaturvedi’s poems are inseparably connected with the cultural history of India and linguistic memories of Hindi, the language in which he writes. The filtration and the sensibility of ideas and imagination make him a delightful, different poet. In a career spanning over two decades with only two books of poems to his credit (the first, a collection of 72 poems published in 2010 and the second, a collection of 63 poems forthcoming this year), he is considered a major poet of present Hindi literature—and, the most imitated. The various adjectives that he has earned, like ‘professor’, ‘master’, ‘avant-garde’ and ‘most-read contemporary Hindi poet,’ reflect the unmistakable aura of his poetry, his strong voice, inner lyrical beauty, multitude of meanings and the ‘text-appeal’.

The appeal is also of a distinct playfulness with the language that gives the reader immense synesthetic pleasure, and of extraordinary metaphors and unusual imagery. As he wrote in the poem ‘Style’, for example:

Geet Chaturvedi’s poetics have also been shaped by his high exposure to the world poetry and contemporary poetic designs of the post-modern European literature; at the same time, they give a sense of rootedness to the Sanskrit-Pali poetic tradition of ancient India. Intertextuality is his trait and his poetry is filled with regional plays, which makes translation particularly difficult. On top of that, Hindi and English are two languages that have very different sentence construction, and also, Indian culture is very different from the western culture. Hence, it requires, at times, great effort to retain the same simplicity and meaning and musicality. For example, in the poem ‘Monsoon is a Sip of Water’, words in Hindi like aashad and poos are the Hindu calendar months coinciding with rains and humidity, and of biting cold respectively. I equated them to monsoon and winter. Keeping the words simple yet effective, I constructed the two lines as:

Monsoon is a sip of water
And winter, a mound of dry cough in the chest

The poem ‘Style’ limns in a style that the poet calls an ‘incoherent poetic structure’, a structure that he has been practicing since long, where each line or stanza creates a world of its own; woven around the most mundane things with a deceptive casualness, an emotive and philosophical sublimity is reached, as, for example, in these lines:

On some nights before sleep, my name is Heart
Morning after waking up I find my name History

The poems raise existential, political or philosophical concerns that reflect the candour, the cadences, wit and erudition.

Geet Chaturvedi (b. 1977) is a noted Hindi poet and novelist. He has authored six books, including two collections of novellas—Savant Aunty Ki Ladkiyan and Pink Slip Daddy—and a collection of poetry, Alaap Mein Girah (2010). His second collection of poems, Nyoontam Main, will be published soon. Often regarded as an avant-garde, he is considered one of the major poets of India by critics and various periodicals and newspapers. He has translated into Hindi the poems of Pablo Neruda, Lorca, Adonis, Czeslaw Milosz, Adam Zagajewski, Bei Dao, Dunya Mikhail, Iman Mersal and Eduardo Chirinos. His poems have been translated into twelve languages. Geet received the Krishna Pratap Award for fiction in 2014 for Pink Slip Daddy. He was awarded the Bharat Bhushan Agrawal Award for poetry in 2007 and was named one of ‘Ten Best Writers’ of India by English Daily Indian Express in 2011. He is currently working on his first full length novel, Ranikhet Xpress. Geet lives in Bhopal, India. He can be followed on Twitter @geetchaturvedi.

Anita Gopalan, translator, trader, and artist, holds degrees in Computer Science and Mathematics from BITS, Pilani and has translated into English many of Geet Chaturvedi’s poems. Her translated works have appeared or are forthcoming in Poetry International Rotterdam, Modern Poetry in Translation, Acumen Literary Journal, Mantis, International Poetry Review, Muse India and elsewhere. She is also a painter. Her collection of translated poems will appear in the book A Cello among the Violins: Selected Poems. She lives in Bangalore, India.

In the lines above, Rilke had
Written hands in place of heart

On some nights before sleep, my name is Heart
Morning after waking up I find my name History

I always wear chappals
Yet understand the touch of wet earth

I rose one evening, watered the plants
I cursed those who had wronged me in sleep

The style in which sleep limns
We call it—creases

The memory of you
Is an essay of my salt

My style of waking
Is shaped by my dark ignorance

Monsoon is a sip of water

Between you and me, there was the veil of cascading droplets
For a fleeting moment, your lower lip twitched

But to love is a matter of practice, you proffered
I released all my grievances into the Arabian Sea

The sky is a potful of water
The earth hiccoughs
Who could be remembering her?
One by one she takes all names
Forgets mine
Nobody could perceive how close I’d been, how near
The one who’s so close so near could also remember

Pretence is not a name
Of any limb or body part

Monsoon is a sip of water
And winter, a mound of dry cough in the chest

*When one hiccoughs, it is believed that someone is remembering that person.

to be late for one’s flight

They knocked my teeth out. I became a member.

that which flies, flaps, beats