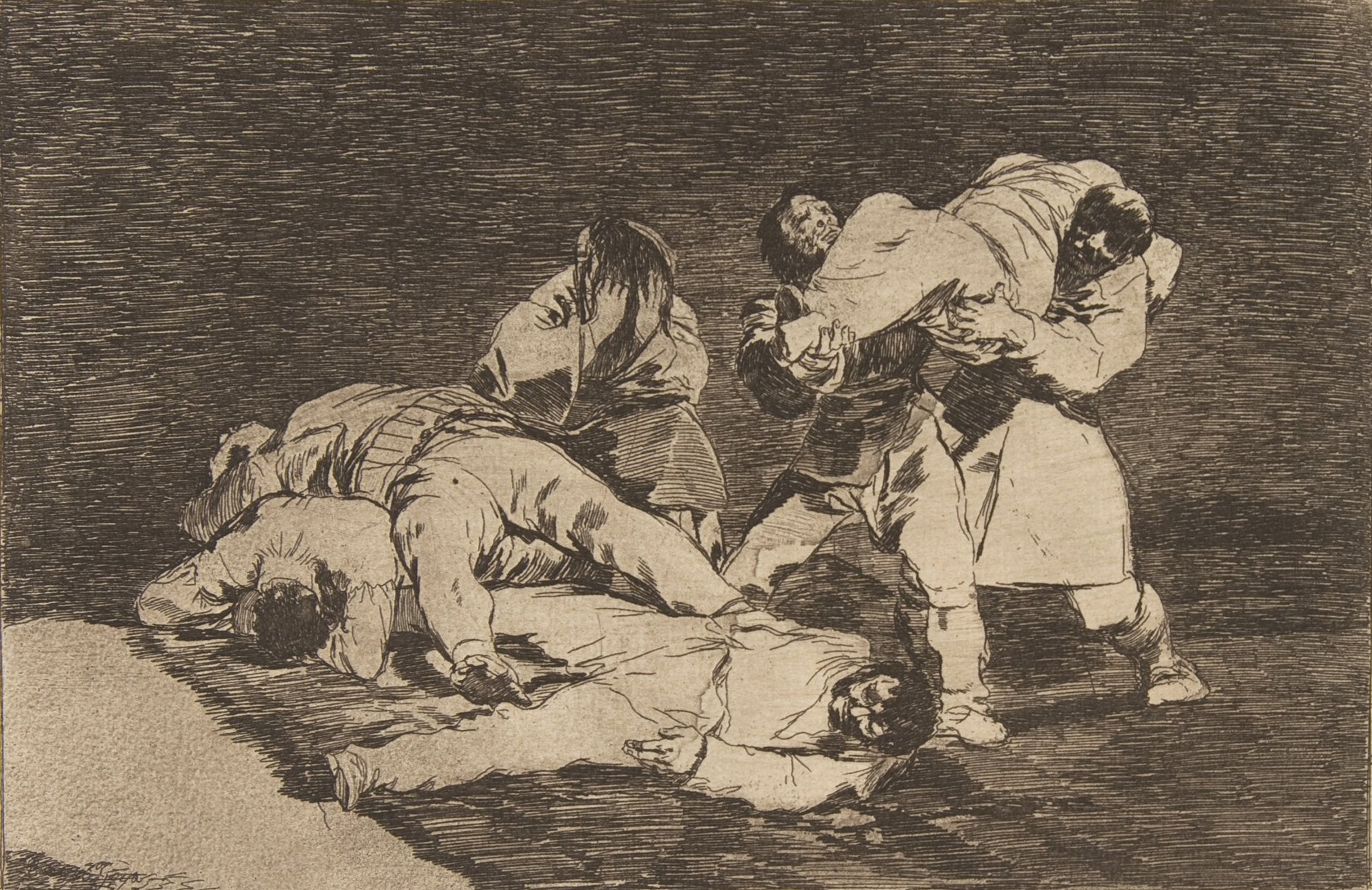 Francisco de Goya y Lucientes, Plate 21 from The Disasters of War (Los Desastres de la Guerra): It will be the same. (Será lo mismo.), ca. 1810. The Metropolitan Museum of Art.

"In the streets of Viy-possessed Kyiv..."

A poem by Osip Mandelstam from The Voronezh Notebooks, translated by John High and Matvei Yankelevich

Osip Mandelstam was born in 1891 in Warsaw into a Russian-speaking Jewish family, which moved to St. Petersburg shortly after. As a young poet, he was associated closely with Anna Akmatova and Nikolay Gumilyov in the Acmeist group, which viewed poetry in architectural terms. Work published in his lifetime included the volumes Stone and Tristia, as well as prose, translations, and children’s poetry. His later work no longer found publication in the increasingly authoritarian Soviet Union of the 1930s, but survived through the efforts of his widow Nadezhda and other friends, to be published in the post-Stalin era. This later work includes the Voronezh Notebooks, from which these two poems derive. Mandelstam died in late 1938 in a gulag transit camp in the Soviet Far East.

John High is a poet and translator. The author of eleven books, he is the chief editor of Crossing Centuries: The New Russian Poetry (Talisman) and a former member of the Moscow Poetry Club. He has translated several contemporary Russian poets, including Nina Iskrenko, Ivan Zhdanov, and Alexei Parschikov. His most recent book of writings, Without Dragons Even the Emperor Would Be Lonely, was published by Wet Cement Press in 2020. He has received four Fulbright and two NEA fellowships as well as grants from IREX and The Witter Bynner Foundation for Poetry. Along with Matvei Yankelevich he received an NEH Fellowship to complete a new translation of Osip Mandelstam’s Voronezh Notebooks.

Matvei Yankelevich is a poet, translator, and editor. His books include the poetry collections Some Worlds for Dr. Vogt (Black Square) and Dead Winter (Fonograf), as well as the translations Today I Wrote Nothing: The Selected Writings of Daniil Kharms (Overlook) and Alexander Vvedensky’s An Invitation for Me to Think (NYRB Poets; with Eugene Ostashevsky), winner of the 2014 National Translation Award. He has received fellowships from the National Endowment for the Arts, the New York Foundation for the Arts, the National Endowment for Humanities, and Civitella Ranieri. In the 1990s, he co-founded Ugly Duckling Presse where he edited and designed books, periodicals, and ephemera for more than twenty years. As of 2022, he is editor of World Poetry Books, a nonprofit publisher of poetry in translation. He teaches translation and book arts at Columbia University’s School of the Arts.

In the streets of Viy-possessed Kyiv
Back then, how someone’s wife ran amok
As she searched for her man — not a tear
Tumbled down those wan cheeks of wax.

No Roma girls’ tarot for powdered darlings,
No fiddles play in the Merchants Gardens,
On Khreshchatyk, the horses have fallen,
Death’s stench wafts from the Lypky mansions.

With the last of the outbound streetcars
The Red soldiers were fleeing the city,
And a rain-dampened overcoat sputtered:
“Before long we’ll be back, don’t forget it…”

In this poem, written in April 1937, about a month before the end of his three-year exile in Voronezh, a southern Russian city close to the border of Ukraine, Mandelstam recalls the violence of the Russian Civil War in Kyiv, where he had gone in 1919 to escape hunger and a wave of indiscriminate arrests and executions in Petrograd [St. Petersburg]. It was in Kyiv—in the Junk Shop café, a bohemian hangout for writers and artists—that he met Nadezhda Khazina who would become his wife. Fearing retribution from the White Army—he had been writing for Socialist Revolutionary and Bolshevik newspapers—he fled south, separating from Nadezhda for a year and a half.

In her memoirs, Nadezhda Manselstam recounts the atrocities they witnessed in Kyiv:

One day just before the Bolsheviks left, when they were shooting hostages, we looked out our window […] and saw a cart piled with naked corpses. Some matting had been carelessly thrown on top of them, but limbs were sticking out in all directions. The Cheka [Soviet secret police, forerunner of the KGB —MY] was located in our neighborhood, and dead bodies were carted like this through the center of the town, presumably to some place outside. I heard they had made a special gutter for the blood to drain away. […] From another window which looked out on the building of the City Council we saw a crazed mob—this was just after the Whites had taken over—running down some red-haired women and literally tearing them limb from limb with a hue and cry about “Rosa of the Cheka.” [Nickname of a red-haired Jewish woman who gained notoriety as a Cheka interrogator during the first Bolshevik occupation of Kiev. —MH] Several women were killed like this as we watched. Later, after M. [Mandelstam] had managed to leave, the town was seized for several hours by the Reds. They got through to the prison and released the inmates. Then the Reds were driven back again, and the town was given over to looting by the victorious Whites. The inhabitants barricaded themselves in their houses, banging on copper bowls and shrieking at the top of their voices as soon as any soldiers appeared. There was a terrific din all over town, and corpses were lying in the streets. The savagery of the Civil War had begun.

Nadezhda’s family lived in the affluent Lypky neighborhood mentioned in the poem. “Viy-Kyiv” alludes to the eponymous all-seeing monster—the Viy—of Nikolai Gogol’s tale of supernatural horror, as well as a poem by Mandelstam’s close friend, Nikolay Gumilyov, the husband of Anna Akhmatova, who was arrested and executed by the Cheka in 1921. Of course, the overcoat that barks out the threat at the end of the poem is a reference to another of Gogol’s short stories, though here it is the coat of a Red Army officer, rather than a lowly scrivener. As in several other pieces from the Voronezh exile period, Mandelstam mixes Ukrainian words into the predominantly Russian-language poem.

my lips, and all you’d loved them for